Hibiki is the son of Keiichi Nishizawa, the current owner of the Nishizawa family company, and Skadi, the Norse goddess of Hunting and the Wintertime. As his son, Hibiki was expected to inherit the family fortune on his 18th birthday from his grandmother after she died. However, his grandmother was a superstitious and traditional woman, and after she found out that Hibiki is the son of a Norse goddess, she left her fortune to Hibiki's bully of a half-brother, Shinichi, in her will. Although Shinichi is a year younger than Hibiki, he would always push Hibiki around and blame him for bad things things that he didn't do. But when his grandmother died, and the fortune went to Shinichi, Hibiki fought for his rights, only to be disowned by his family for "not respecting his grandmother's final wishes". And now, Hibiki is penniless and now has to live at Camp Asgard year round to survive.

Hibiki is a pale young man, with a lean and muscular build. Hibiki has short messy silver hair with a long ahoge, and cold indigo eyes. He seems to have a permanent frown of scowl. Due to living at Camp Asgard all year, he has to wear heavy clothing. So he wears his favorite gray parka.

Even at a young age, Hibiki was a shy and reserved boy. However, when his "little brother", Shinichi, came into the picture and started bullying him, that only served to bitter poor Hibiki. And after his family fortune went to Shinichi just because Hibiki was a demigod, and he was kicked out of the family, Hibiki simply became silent, having this cold aura about him. If anyone tried talking to him, he'd snap at them to go away. However, deep beneath his cold exterior is a warm, loving person, who wants to be loved by someone.

Hibiki was trained as an assassin by his clan's martial arts instructor. Specifically, he was trained in the martial art of Koppojutsu, which targets am opponents bones, joints and pressure points. Hibiki is also an expert knife fighter. He uses his powers over the cold to summons knives of ice, which he calls the "Knives of Vinter", to fight with. Usually fighting with three in between his fingers at once, he is a very deadly foe. Also with his powers over the cold and Winter, he can surround himself in a blizzard to make it hard for foes to get to him. He can withstand these temperatures because his mother is the goddess of the Winter.

Hibiki's flaw is his silent and cold demeanor. It causes people to be scared of him. 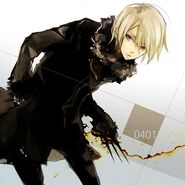 Hibiki with the Knives of Vinter.

"A mission? Can I kill some Egyptians?"
Add a photo to this gallery
Retrieved from "https://demigodcentral.fandom.com/wiki/Hibiki_Nishizawa?oldid=10973"
Community content is available under CC-BY-SA unless otherwise noted.