This page belongs to Gojira1234

Sabrina was born in Bucks County, Pennsylvania. She lived with her father until he died in the middle of the night when he was driving home. She was with her grandmother at the time, as she was babysitting her. After her grandmother died when she 7, a satyr named Michael (who died in the Second Titanomachy) found her crying on the side of the street, and promptly brought her to Camp Olympus. She lived in the Hermes Cabin for 6 years until she was claimed by the night goddess, Nyx. She was sickened by this, since her father died in the middle of the night, as his head lights broke, and he couldn't see. She now holds a grudge against Nyx for this. In the first year at camp, she made only 2 friends. Those friends being Kaito Fukuyama (Son of Apollo), and Ariel Henson (Daughter of Eros). The three always hang out with each other and go on quests together. Currently, the three are going to Greece, and fight Chaos, the Primordial being of the universe.

Sabrina has very long deep violet hair, sometimes in a ponytail, and beautiful blue eyes. She is very beautiful, fair-skinned, a great figure (several men from Camp have asked her out, but she's turned them all down). Casually, she'll wear really anything, but usually had her hair down.

Sabrina is a fun, outgoing young woman. She only ever talks to her friends. She loves dark things, such as voodoo, black magic, horror movies, etc. Her favorite movie is The Exorcist, and she buys most of her clothes from Hot Topic. She often reads Creepypasta, and has built an immunity to fear because of it. However, she also loves anime, and is a huge Otaku. Her favorite anime is Hetalia. Her favorite character from said anime is America, and she often draws herself with him, much to Kaito's dismay (as he likes her and finds it weird that she ships herself with a fictional character). She hates her mother, Nyx (the Goddess of the Night), as her father died in a car crash at night. Her reasoning is the she could've saved him, or at least "Given him night vision, or something!" She also LOVES Vocaloid and cute things (i.e. Len Kagamine). She is currently in a relationship with Jake Kamiya.

Sabrina is an adept fighter, who uses her Stygian Iron Longsword to cut down any monster in her way. She can channel darkness energy through Máv̱ros, causing razor blades of purple energy to come out, or to enhance its deadliness by encasing it in energy. She likes guns and rifles as well, and even used some in the Second Titanomachy. Her demigod powers include night vision, shadow travel, calling upon Hellhounds (she tamed one and named him Cocoa), and using shadow energy to fire shadow balls, or appear from the shadows. She can also control people's shadows, and uses them to control a persons movements.

Sabrina is distracted often, especially for a person with ADHD. She sees something she likes (a cute boy, a dog, or a Hot Topic store), she'll be fixated on it.

Sabrina, with Máv̱ros in hand. 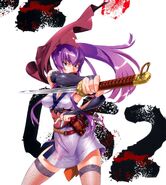 "Have I told you I'm a cosplayer?" 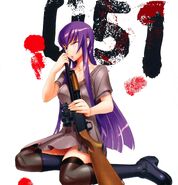 "This isn't my first time with a gun. I'm in no danger of shooting my face off~."

"Oh Jakey~! I have a surprise for you~!"
Add a photo to this gallery
Retrieved from "https://demigodcentral.fandom.com/wiki/Sabrina_Nightshade?oldid=9208"
Community content is available under CC-BY-SA unless otherwise noted.